The Hai Yun Ju Nunnery (Sea of Clouds Abode 海云居) is a lively functioning temple and features many sacred rooms, shrines and intact buildings. It is not listed on the tourist maps but is well worth an hour's visit at least. There are rooms for accommodation, a vegetarian kitchen serving simple meals and a garden where much of the food is grown. The Nunnery sill has resident nuns, but many more will come for festivals and events to chant prayers. Hai Yun Ju is looked after by elder Bai women, mostly from Shilong Village nearby, who keep the candles and incense burning while a few men keep track of donations. The caretakers are all very friendly and will invite visitors to have tea or a meal. In the main hall is a 6 meter white jade Buddha from Burma who pilgrims come to worship from far away.

Haiyun temple is the first temple encountered at the Shibaoshan area. Dating back to the 17th century, the Chan Buddhist temple is important for local Bai minority people, but this secluded templed is often overlooked by visitors seeking monkeys, cliff temples or ancient symbolic stone carvings found further into the Shibaoshan area. Located on the left after the ticket office entrance, Haiyun is tucked away on the north-west forested flanks of Stone Umbrella mountain. As well as the ancient temple complex hidden among the trees behind the moss-covered walls, there are stupas, stone urn tombs, caves with bats, red rock formations resembling umbrellas and old tall trees. Two elderly matriarch caretakers add to the olde-worlde feel of the historic buildings. Wild camellia trees grow around the temple, meaning the temple and nunnery is also known as the Camellia Temple. You can even make fresh tea with the leaves. The lovingly-tended gardens in the grounds provide a spectacle throughout the year.

Low, narrow stone stairs lead to the traditional stone gateway that greets visitors with an old classic Buddhist poem carved into the rock. Further along a few more steps, century-old cypress trees stand by the main entrance to the temple, their branches used as incense. The entranceway is guarded by two scary-looking Tibetan Buddhist door gods, Heng and Ha. Because of Dali's location and proximity to the direct teachings of the Buddha and the spread of Buddhism through Tibet into the Chinese borderlands, these temple bouncers are found in most Buddhist temples throughout the Bai minority areas around Dali.

As you walk into the temple complex, there is a happy Buddha with a chubby belly, seating in the middle. The second hall features four figures, representing the four directions of the Universe.. Known as the Four Heavenly Kings, each is holding a powerful magic tool. Follow the stairs to the first garden, turn left and you will reach the second floor, directly above the four direction gods. The 'fengshui' of this place is very good. On a clear, sunny day, you can see in the distance the glistening snowy peaks of the Jade Dragon Snow mountain near Lijiang.

Prominent in this part of the temple is Guanyin, the goddess of mercy, compassion and kindness. She appears in white holding a vase in one hand, and willow branches in her other hand. Many Bai women and children come to pray to her. On the left of Guanyin are two goddess figures. One sitting on an elephant is the goddess of actions and deeds. The other sitting on a green lion is the goddess of wisdom, holding a book in one hands and a sword on the other to cut off all desires and troublesome thoughts. Throughout China, there are four goddesses, but in this temple there are only three, with the goddess of will and wishful thinking not represented. In the right corner, is the figure of the monk Tangseng, a key person in the spread of Buddhism from India to China. A skilled language scholar, he was asked by the Tang Dynasty Chinese emperor to travel to India with the monkey king to fetch the first Buddhist scriptures. He is regarded as the founder of one of the eight schools of Buddhism in China, the East Asia Yogacara school.

Walk on, past the garden, and in the hall above stands the tall, dark figure behind the glass of Guanyu, a warrior from the Eastern Han Dynasty (25AD-220AD). He was known as a brave fighter, who was also fair-minded, and was worshipped as the spirit of warfare. In China, he is often paired with the master of learning and knowledge, Confucius. Behind Guanyu is a garden which faces the main hall. The wooden sign says save yourself first to save others. The six-piece wooden carved doors tell the story of the rebellious monkey king before he ventured to India. On the left wall, there is a classic painting of the monk Pu Lian, with his student, who built this temple in 1684. Inside the main hall, there are three Buddha figures, the flanking images are quite old and made of clay, while the central Buddha is made from jade from Burma (Myanmar). Painted on the walls are the four-direction gods.

So how did Haiyun temple come into being almost 350 years ago? The story goes that during the Ming dynasty a travelling monk Chushi visited the area, and fell in love with the quiet of the majestic mountains around Jianchuan. A young man asked to be his student, and together they explored the area, finding an ideal place to found a temple and monastery in the hills. They collected funds, and the temple was finally opened in 1684. Abbot Chushi decided it was time for him to move on, so he left the student, Pu Lian, to be in charge. The remains of Pu Lian are held in the large stone urns outside the main gate. 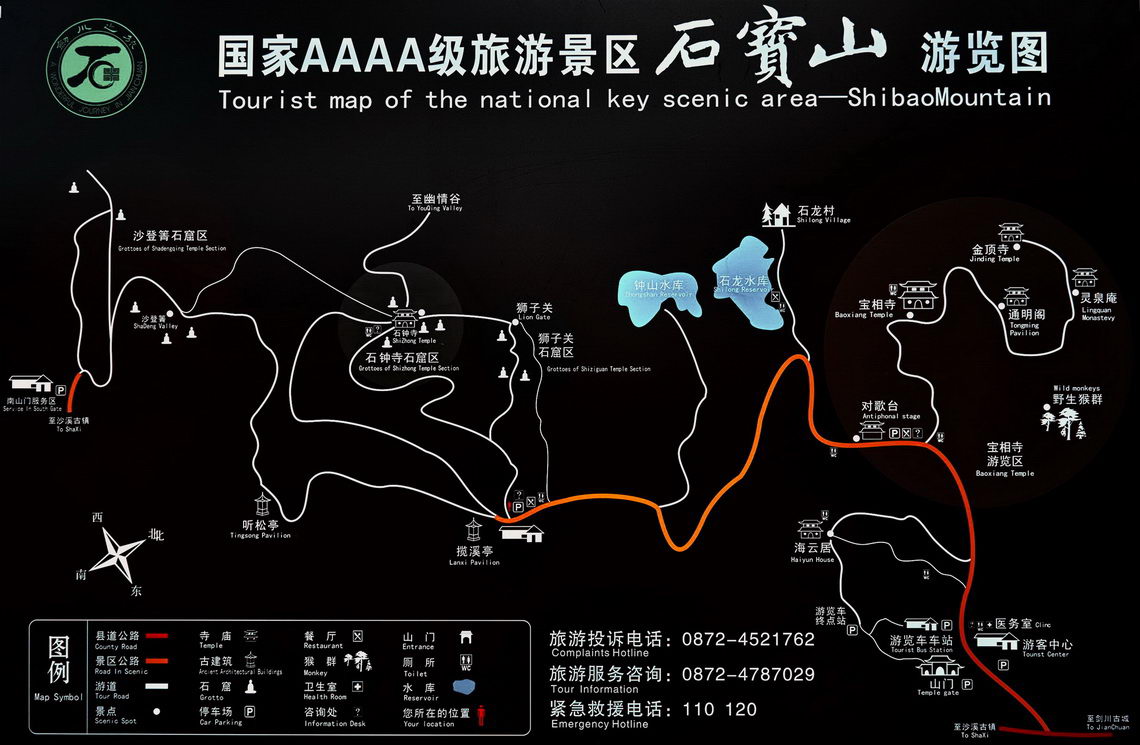