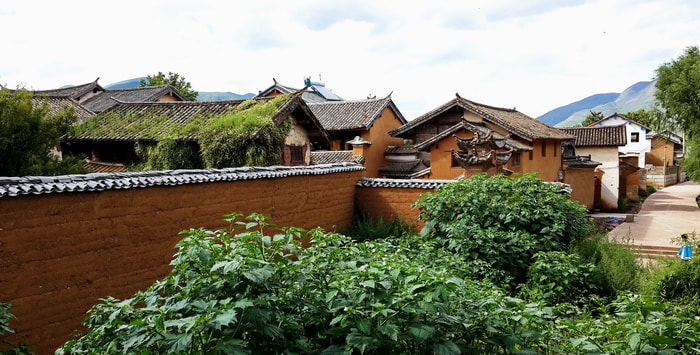 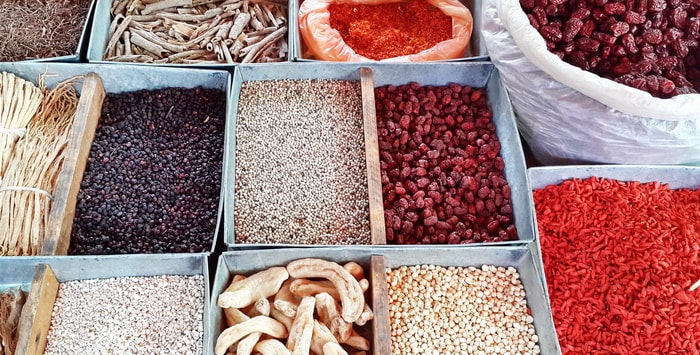 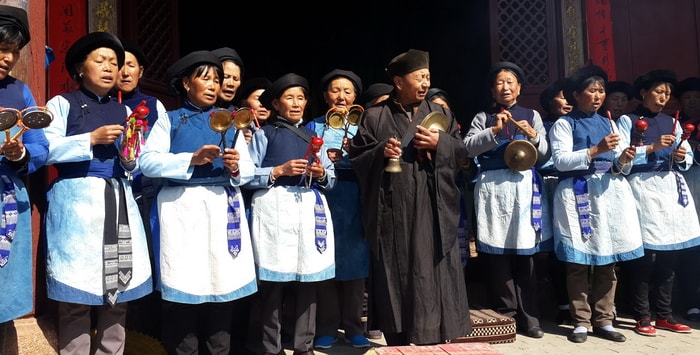 Known locally as 'Ci Yin An' 慈荫庵 (Temple of Sheltered Mercy), this breathtaking multi-level temple complex, commanding spectacular views across the valley from its vantage point at the head of Diantou Village, was actually a functioning nunnery until the religious purges of the 1960's. The series of shrines, halls and kitchens were recently restored by American designer Chris Barclay, builder of Yangshuo Mountain Retreat and Yangshuo Village Inn in Guangxi Province. Expert local craftsmen were bought in to preserve the original structures through traditional building techniques and showcase their incredible carpentry and stone-masonry skills. Surrounded by some of the last remaining old growth pear trees, the Pear Orchard Temple now boasts an award-winning vegetarian restaurant, Pear Blossom Organic, as well as cooking classes led by temple chef Madame Yang. 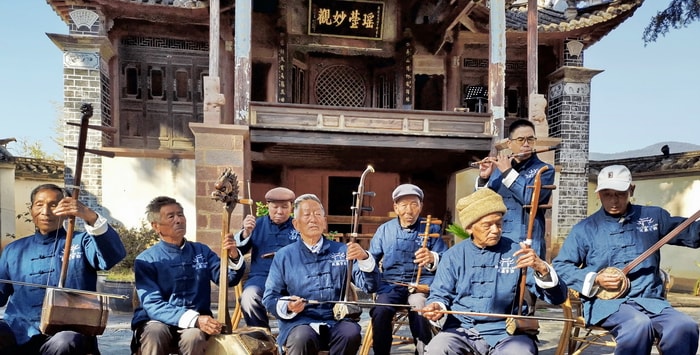 The unique Dongjing Guyue 洞经古乐（“Aancient music from the cave) is a fading musical tradition in the Bai and Naxi areas of Northern Yunnan. Performed by an ensemble of eight men and played mainly on erhu (two-stringed cellos) and percussion, the music tells stories of the Dali region. Currently in Shaxi there are still a few village ensembles consisting of elderly men who still perform. Mainly performing during local festivals, one group can be heard some evenings at the Xi Lu restaurant in Shaxi Old Town and another in Duan Village, performing on the ancient theatre temple stage at Old Theatre Inn 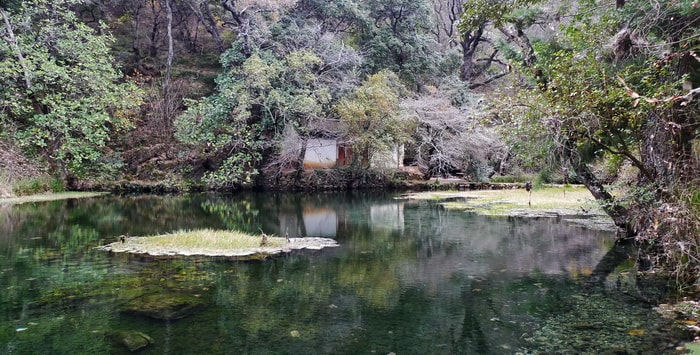 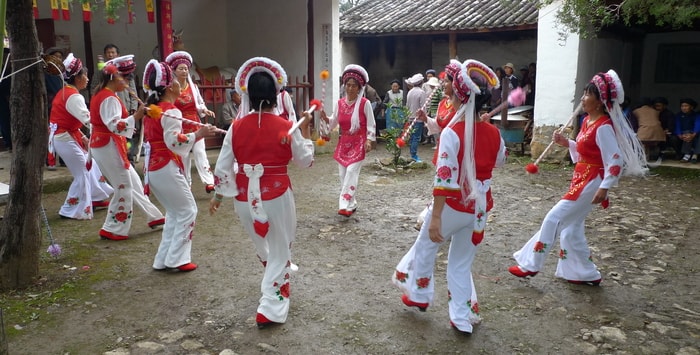 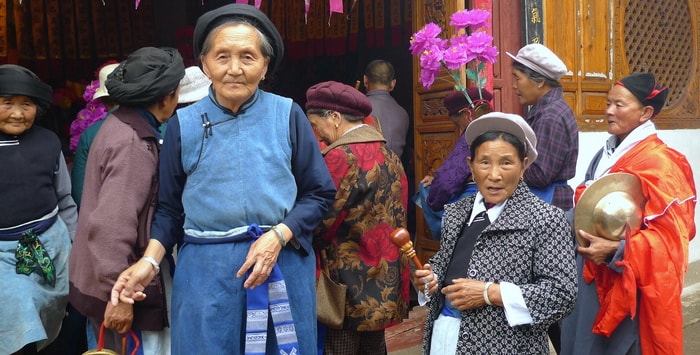 Occupying the region for at least 3,000 to 4,000 years, the Bai are the second-largest minority group in Yunnan, as well as being one of the oldest. The 2000 census identified just over 1,800,000 individuals as Bai and speaking the Bai language, 80% of whom live in the Dali Bai Nationality Autonomous Prefecture in Yunnan Province. In Guizhou, the Bai can also be found in Bijie, and in Sichuan they live near Xichang. Throughout their history, the Bai have dominated by controlling the richest agricultural lands, either administering the region for others or ruling outright through a number of prominent families. Scattered throughout the Shaxi valley are sixteen Bai minority villages. The population of these villages ranges from a couple hundred to a few thousand in the main village of Sideng, with about 22,500 for the entire valley.
Shaxi retains the vestiges of a matriarchal society, but in the twenty first century, this now extends only as far as children taking the family name of their mother. The Bai—the "white"—revere the color, which they regard as noble and is the main color of their traditional dress. An unmarried girl always combs her hair into one pigtail, tied with a red string at its end, and then coils it over her head. In general, girls enjoy dressing up like beautiful camellia flowers on special occasions, and so it is hardly surprising that they are referred to not as 'miss' or 'young lady' but as 'jin hua' or 'golden flower'.

The Yi or Nuosuo ethnic group are historically known as Lolo, and number more than four million in Yunnan Province, most of whom are concentrated in an area hemmed in by the Jinsha and Yuanjiang rivers, and the Ailao and Wuliang mountains. Huaping, Ninglang and Yongsheng in western Yunnan form what is known as the Yunnan Lesser Liangshan Mountain area. The Yi's traditionally live in the mountainous areas, herding and hunting with susbsistance agriculture. The are likely descended from Tibetan and Naxi people and they practice a form of animism, led by a shaman priest known as the Bimaw. They still retain a few ancient religious texts written in their unique pictographic script, similar to the DOngba writing of the Naxi in Lijiang region. Their religion also contains many elements of Daoism and Buddhism. The Yi around Shaxi are scattered in Shaxi high mountain areas, mainly cultivating potatoes, corn, wild honey and Chinese traditional medicine such as ginseng. Vast forests stretch across the Yi areas, where Yunnan pine, masson pine, dragon spruce, Chinese pine and other timber trees, lacquer, tea, camphor, kapok and other trees of economic value grow in great numbers. The Yi of Shaxi can be seen in the valley particularly around market days. The women are distinguished by their brightly colored yellow, green and red clothing, often accompanied by ornate head dress.

The Southern Silk Road, better known as as the Ancient Tea Horse Caravan Road predated its more famous northern counterpart by at least 300 years, The first written records of the route are from the Tang Dynasty (618-907), which was locally known as the Nanzhao Kingdom period (649-920), but trade had been taking place long before this time. From the hillside plantations of Simao and Xishuangbanna the muleteers brought pu'er tea; Burmese traders, often accompanied by Indian monks bought hides and animal bones, for use in in Chinese medicine. Salt, an essential commodity before the advent of refrigeration, came from Qiaohou, south of Shaxi, and from Yunlong across the mountains to the west, along with silver from Misha, and nearby Heqing. As well as felt, silk and precious stones came that most valuable of medicines, opium, perhaps Yunnan's largest cash crop at the time. All of these and more were traded with Tibetans for items such as musk, rare fungi and exotic medicines, found in the frigid mountains to the north. The main village of Sideng became an important staging post for the caravans, and the whole valley flourished in the Ming and Qing Dynasties. The market square became famous throughout the southwest, and attracted traders from a wide range of cultures that only enhanced the profitability of the Tea Horse Road. Hani from southern Yunnan brought tea and rich cloths. Naxi from Lijiang brought timber, Muslim Hui bought yak furs and horses. The wealth generated by all this trade is clearly evident in the ornate local architecture, with their imposing gate towers and spacious courtyards. At the center of all this, stands the Qing dynasty theater, directly across from the 400-year old temple, dedicated to as wide a range of faiths as the merchants and pilgrims that turned this remote village into a vibrant trading hub, which lasted well beyond the end of the Qing Dynasty (1614-1911).
The caravan routes finally died out around 60 years ago, when the newly formed People's Liberation Army began its advance on western Tibet, and requisitioned every pack animal they could find. The centuries old trade routes came to an abrupt end by 1950, when the communists' ban on private markets put the last nails in the coffin. The locals quickly reverted to agriculture and passed the last few decades in relative isolation.
More recently, the World Monument Fund added Shaxi's market square to its Watch List of 100 Most Endangered Sites in 2001. By this time squatters had taken over much of the village, and many of the buildings had decayed to the point of collapse. In 2002, the Swiss Federal Institute of Technology Zürich (ETH) and the People's Government of Jianchuan County jointly established the Shaxi Rehabilitation Project (SRP) to protect and revitalize the cultural and natural heritage of Sideng Village and the Shaxi Valley. With USD1.3 million in funding from the World Monument Fund they hired a Swiss conservation expert Jacques Feiner, who had previously made his name at Yemen's old city of Sanaa, one of the earliest centers of population in human history. His approach has been to restore rather than rebuild, using traditional techniques and materials wherever possible. Apart from the restoring the temple and the stage, the entire market plaza was drained and relaid, which has led to a number of major awards, including a UNESCO Award of Distinction for cultural heritage preservation.
For those interested to explore more about the Tea Horse Road's history, culture and legacy, we highly recommend Peter Micic's blog, the Tea Horse Road project. Peter is a skilled translator and writer, with a passion for Chinese history in this part of the country. He explores old tree plantations, writes poems and follows the original sections of the Tea Horse Road to give readers a first hand experience of what it was like to travel with the ancient mule caravans. An excellent source of this storied route's visual history is the award-winning documentary Delamu, which follows one of the last muleteers through the rugged Nujiang region of Yunnan. Along the way are intimate portraits of the indiginous people who still live along the Tea Horse Road. 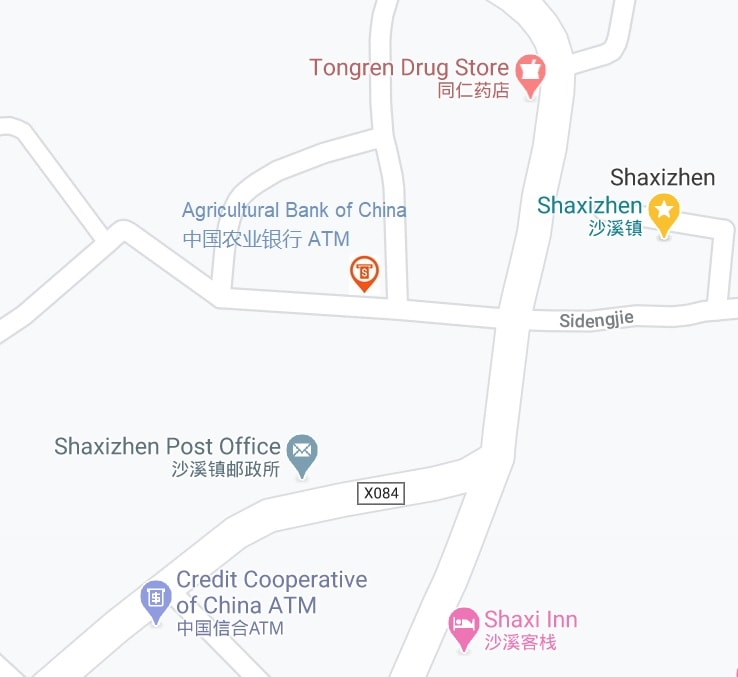 There are two banks with ATMs in Shaxi town. As you head up the market street away from the old town, the road turns to the right and after a series of shops and small restaurants, you will see the Post Office on your right and just past it across the street is the 农村信用社 (Nóngcūn xìnyòng shè) or Rural Credit Cooperative. Look for the bright orange facade with the ATM up the steps next to the door. The 中国农业银行 (Zhōngguó nóngyè yínháng) Agricultural Bank of China ATM is closer to the big stone and waterfall that mark the entrance to the old town. Facing away from the steps, cross the main street and continue directly up the street ahead. The bank is about 30m up the street to your right on the corner of a small side street.

As you head up the market street away from the old town, the road turns to the right and immediately across the street, on the same side as Xilu Restaurant, you will find a China Mobile shop. There are other shops selling mobile phones on the other side of the street but they may not be authorized dealers. All will have spare batteries and accessories.