THINGS TO DO IN SHAXI

LEGACY OF THE NANZHAO KINGDOM Shaxi music is the last surviving tradition of ritual music that originated possibly as far back as the Song Dynasty and can be heard in live performances around the Shaxi valley. The music is called 洞经古乐（“Ancient music from the cave) is a fading musical tradition in the Bai and Naxi areas of Northern Yunnan. Dongjing is said to have been sung by Taoist monks from the region. There are also traditional Dongjing operas, such as Song of the Water Dragon, Waves Washing the Sands and The Sheep on the Hill. It is played on traditional string and percussion instruments, typically by an ensemble of anywhere from 4-16 men, while women may accompany with song.

Performed by an ensemble of eight men and played mainly on erhu (two-stringed cellos) and percussion, the music tells stories of the Dali region. Currently in Shaxi there are only a few village ensembles consisting of elderly men who still perform, mainly performing during local festivals. Apart from the Shaxi Singing Festival in September, there are performances by guest request on the theatre temple stage at Old Theatre Inn. The cost is RMB 800 and may be shared among a group of guests. The show lasts approximately 45 minutes and includes 8 songs. THe historic theatre temple has created regular rehearsals for the ensemble of local men from Duan Village. Start off on a bike ride with Chef Yang through Shaxi Valley to learn about the foods that have been grown here for millenia. Stop to pick your own vegetables from the fields, grown by local farmers for their own families and who use no pesticides. If you choose to do the cooking class on a Friday, Chef Yang will take you on a tour of the Friday Market where you will buy ingredients for your dishes.
Head to the Pear Orchard Temple, a recently restored 500 year-old folk temple where we have build a new kitchen just for cooking classes. Here you'll spend the next 2-1/2 hours preparing and enjoying four dishes you will cook yourself. Gaze out over the Shaxi Valley from our dining terrace (weather permitting) and enjoy a complimentary pot of tea.
For reservations, speak to Sam at Old Theatre Inn or email us in advance of your stay to reserve places in the class. A delightful experience awaits at the Shaxi Bookstore and library, located at the Southern edge of Beijong Village 北龙村 (Běi lóng cūn). You can get there by crossing the Heihui River 黑惠江 (Hēi huì jiāng) from the Southeast side of Shaxi Ancient Town. Walking from the North end of the Shaxi Valley, there is a paved country road that runs from Old Theatre Inn directly to Beijong Cun without crossing the river. The walk is 15 minutes from town and 20 mintes from Shaxi Old Theatre Inn.
There is a very respectable coffee shop inside, as well as comfortable sofas and chairs to relax with a book. 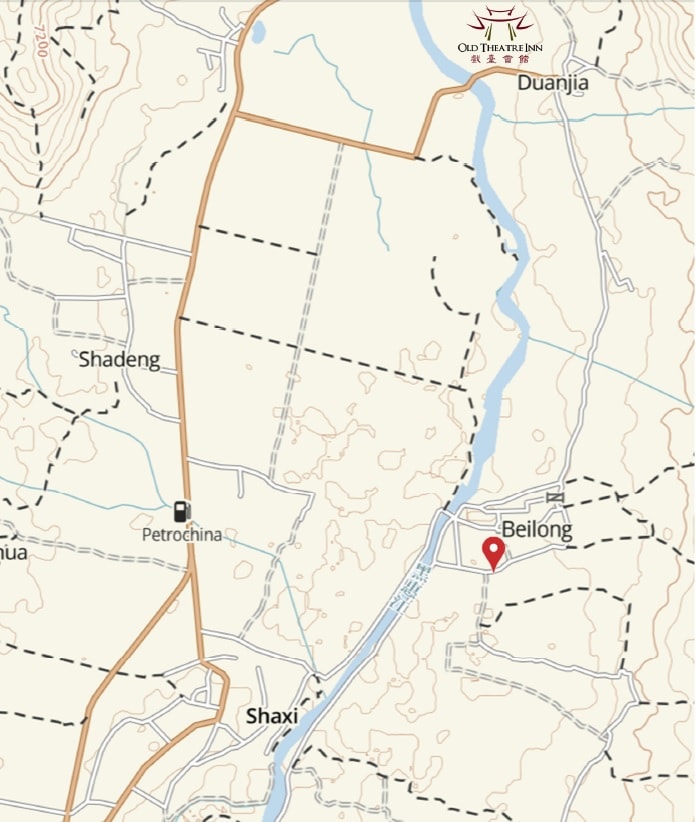 The list of villages below offers an excellent glimpse into the rural side of China offering an authentic experience and a chance to soak up the local culture.

Walk up the flagstone street along a channel of mountain spring water rushing down and you will see a wealthy Shaxi village with the best feng shui in the valley. A road to the right halfway up the street leads out to a new concrete path that goes all the way down to Beilong VIllage, passing through lush fields of corn, tobacco and canola. Continue up the main street to the acquaduct and cross over. This leads to goat trails that continue and climb over 500m in vertical gain up the Eastern slopes of Damu mountain. There are custom trail maps available on these routes at Old Theatre Inn.

Diantou is the 2nd largest Shaxi village next to Sideng and is home to the Pear Orchard Temple, a recently restored nunnery and vegetarian restaurant. From the temple, there is a road that heads West up the mountain all the way to the stone steps that lead to the Shizhong Temple parking area where one can easily walk down to the grottoes. Admission from this point is just RMB 30. Diantou is also a quite affluent village and one can observe residents in the square playing mahjong or chess. There is an oil press, a kiln, several small shops for daily goods.

Beilong Village is on the East side the Heihui River with a bridge across that leads to Sideng and Shaxi Old Town. Behind Beilong are trails that lead up the steep mountain to Yi farms up on a plateau around 3,000m in elevation. Beilong has new roads and is easy to get around by bike.

Hualong is up on an Eastern bluff overlooking the Old TOwn and South end of the Shaxi Valley. The roads are narrow and winding. From here, one can access a new switchback road that cars can take over the mountain down to Eryuan and Dali. This village is not very wealthy because of its somewhat remote location above the valley but there are many traditional houses and scenic overlooks.

There are scatterings of Yi enthic minority villages up on the high plateau that spans the mountains on the East side of Shaxi. They are mostly subsistance farmers growing medicinal herbs, potatoes and corn. You can read more about the Yi people here. A tradition that dates to the tea horse road

Market day is the highlight of the week in Shaxi valley, when everybody congregates in the old town to stock up on produce and exchange gossip. Rows of traditionally dressed Bai matriarchs squeeze together along the curbside to offer a wide range of local fruit and vegetables, grown with their very own green thumbs. Yi women in bright scarlet and bold turquoise, trek for hours down from their mountain villages to trade with the lowlanders, making for one of the most colorful and photogenic market days in Yunnan.

To the left of the main street is the meat market, where you can find freshly made goats cheese, cow bells and craftsman made horse tackle. In the wet market, on the right hand side, visitors can find a whole range of unusual local fruit and veg, from skirret and lotus bulbs, to quince and custard apples. Traveling vendors fill the main street, hawking everything from farm tools to fruit trees. Look out for wig makers that buy hair by the kilo (cut and weighed in situ), pavement dentists, and itinerant Han Chinese cheapjacks trying desperately to flog the latest in labor saving devices. Up beyond the minibuses, do not forget to check out the livestock market where piglets, nanny goats and even water buffalo are all available for inspection and purchase. Do not forget to stock up with apples and carrots, as this will ensure that you will quickly be able to make fast friends with any goats, donkeys and ponies that you encounter while out hiking. In earlier times, young locals would gather at the Baoshan temple during the 3 days from the 27th to 29th every lunar month, to sing love songs and court other young singles. These days the activity has been concentrated into an annual event that begins on the 27th of the seventh lunar month. The Singing Festival is one of the colorful events of the year, and it is a great experience to see all the local subgroups of the Bai and Yi turn out in their best dresses. The temples are full of VIPs, TV crews and traveling tinkers, while the locals compete for the titles of singing King and Queen. Like Shibaoshan itself, the festival does not receive a great deal of visitors from afar, but considering its ease of access and its stunning spectacle, this is likely to change in the very near future. Best of all, on the days of the festival, the entrance fee is lowered to just 2 RMB. A taste of Shaxi

Join Apple, an English-speaking Bai guide from Dali on a tour of farms, markets and households that produce the specialty foods in Shaxi Valley. Advance reservations are required.

Explore Shaxi with an English-speaking guide who can help families with children get the most of a visit to Shaxi. Highlights include milking a village family cow, feeding pigs and chickens, preparing a traditional meal and visiting with local craftspeople. Advance reservations are required.

Join Mr. Wu, a local Bai teacher and partner of Old Theatre Inn with caligraphy lessons for individuals or small groups of up to 8 people. Advance reservations are required. Pu'er tea has been the life blood of the Tea Horse Road for hundreds of years, despite the fact that it remains relatively unknown in the west. White, yellow, green, oolong, black, and pu’er tea leaves are all picked from the same bush, the camellia sinensis. Most of the major differences arise from the way in which the leaves are processed, although climate, elevation and soil all influence the final taste. By far the most important factor, is the level of oxidation that the leaves are allowed to undergo. In the same that an apple begins to brown as soon as it is exposed to the air, tea leaves begin to oxidize naturally as soon as they are picked. The secret with pu'er tea however, is a secondary fermentation process, similar to that of sugars transforming themselves in alcohol in wine, utilizing bacteria only found in Southern Yunnan. Finally, the tea is formed into chunky bricks and cakes, often being pressed into molds by barefoot villagers, similar to the way that grapes were originally pressed for wine.
The resulting product proved especially popular with Tibetans. Up on the higher parts of the plateau, vegetables and grains are extremely difficult to grow, and so the population relies heavily on the yak as a major food source. This means a very high cholesterol diet that is rich in fats, oils and salt. Fermented pu'er tea greatly benefits the digestive system, and was the perfect way to improve their fiber-free diet. During the long and hazardous journey, over roaring river valleys and snow-bound high passes, the sweat of the mules deeply infused the saddle bound tea bricks. This, along with the months of bright sunshine of the high elevations, caused the tea bricks to slowly ripen along the way. Ironically, many Tibetans claimed that the taste just was not the same when the bricks started being shipped in by air. Who would have known that horse sweat was such an essential ingredient in a good cup of tea?
Some of the best hand-pressed pu'er tea can be purchased in Shaxi ancient town Sideng Square from a young man named Ah Ping, whose family owns a tea plantation in Baocheng, South of Dali. Look for his shop around the corner from 58 Yard Hostel. You can watch him press and package the tea and his retail prices are reasonable for this quality family-owned product. See more about local products under the Shopping link on Shaxi Ancient Town page.